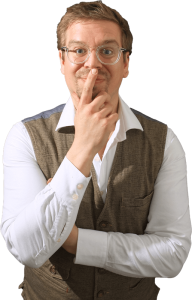 As a child, Atticus was an angelic chorister for his local choir. When puberty hit and his voice broke they kicked him out with a ‘thank you’ and a £25 WHSmith voucher. He immediately went and bought a Jimmy Hendrix CD and a deck of Tarot cards.

Over the next 20 years Atticus studied Tarot, reading dynamics, victorian charlatanism, mentalism and everything in-between.

By now he had gained and developed techniques in psychology and body language and used these to perform as a Mind Reader, or Mentalist.

After dipping his toes into the real world and deciding it just wasn’t for him, Atticus realised he could do what he loves AND earn a living from it.

Now in his mid thirties, Atticus is happily married with two dogs and a wonderful, weird and bonkers job – Master Mind Reader and Tarot Reader. Atticus has created, lectured and consulted for some of the worlds leading mentalists and performs simply because he loves what he does. He knows he’s a lucky chap, but can’t get used to referring to himself in the third person.

We use cookies on our website to give you the most relevant experience by remembering your preferences and repeat visits. By clicking “Accept All”, you consent to the use of ALL the cookies. However, you may visit "Cookie Settings" to provide a controlled consent.
Cookie SettingsAccept All
Manage consent

This website uses cookies to improve your experience while you navigate through the website. Out of these, the cookies that are categorized as necessary are stored on your browser as they are essential for the working of basic functionalities of the website. We also use third-party cookies that help us analyze and understand how you use this website. These cookies will be stored in your browser only with your consent. You also have the option to opt-out of these cookies. But opting out of some of these cookies may affect your browsing experience.
Necessary Always Enabled
Necessary cookies are absolutely essential for the website to function properly. These cookies ensure basic functionalities and security features of the website, anonymously.
Functional
Functional cookies help to perform certain functionalities like sharing the content of the website on social media platforms, collect feedbacks, and other third-party features.
Performance
Performance cookies are used to understand and analyze the key performance indexes of the website which helps in delivering a better user experience for the visitors.
Analytics
Analytical cookies are used to understand how visitors interact with the website. These cookies help provide information on metrics the number of visitors, bounce rate, traffic source, etc.
Advertisement
Advertisement cookies are used to provide visitors with relevant ads and marketing campaigns. These cookies track visitors across websites and collect information to provide customized ads.
Others
Other uncategorized cookies are those that are being analyzed and have not been classified into a category as yet.
SAVE & ACCEPT